In COD we Trust

A beloved representation of a star behind the scenes…

I built this model several years ago for my friend Mike, who used to fly it when assigned to the VRC-30 “Providers”.

This project was a little different than others I made in the past. It was a rare subject and depended 50% on a kit conversion, so the odds of making something decent were at some point uncertain.

It was still a very nice challenge, not only because I was making this for a friend that actually flew the plane, but because the COD effort is not usually on the spotlight and doesn’t look fancy, when in reality they are an essential piece for carrier and fleet operations. They are a star behind the scenes…

A little bit about the C-2A Greyhound

The C-2A Greyhound provides critical logistics support to Carrier Strike Groups. Its primary mission is the transport of high-priority cargo, mail and passengers between carriers and shore bases. This is known as "Carrier On-Board Delivery" (COD).

Powered by twin Allison T56-A-425 turboprop engines and Hamilton-Standard constant speed propellers, the C-2A can deliver a combined payload of 10,000 pounds over a distance in excess of 1,000 nm. The interior arrangement of the cabin can readily accommodate cargo, passengers and litter patients. Priority cargo such as jet engines can be transported from shore to ship in a matter of hours.

The C-2A Greyhound is a derivative of the E-2 Hawkeye and replaced the piston-engine powered C-1 Trader in the Carrier On-board Delivery role. The C-2A shares wings with the E-2 Hawkeye but has a widened fuselage with a rear loading ramp.

The first of two prototypes flew in 1964 and production began the following year. The original C-2A aircraft were overhauled to extend their operational life in 1973. In 1984, a contract was awarded for 39 new C-2A aircraft to replace the earlier airframes. Dubbed the Reprocured C-2A due to the similarity to the original aircraft, the new C-2A included substantial airframe and avionics systems improvements. All the older C-2As were phased out in 1987, and the last of the new models was delivered in 1990. As we recently learned, the C-2As will soon be replaced by the VTOL capable V-22 Osprey.

According to their official website, the VRC-30 traces its ancestry to Air Transport Squadron FIVE (VR-5) which was commissioned 24 June 1943 at Naval Air Station Seattle. The Squadron was tasked with flying the Douglas R-4D "Skytrain", R-5D "SkyMaster", Beechcraft SNB "Expeditor" and the Noorduyn JA-1 "Norseman" aircraft in regular air service to Seattle, Oakland, San Francisco, the Aleutian Islands, Fairbanks and Point Barrow on the Alaskan Mainland.

In 1948, the Naval Air Transportation Service and Air Transport Command merged and became the Military Air Transport Service. VR-5 was placed under the command of Fleet Logistics Support Wing, U.S. Pacific Fleet. In 1950, VR-5 moved its base of operations from NAS Seattle to NAS Moffett Field CA. Detachments were established in Seattle and at NAS North Island, CA. VR-5 was decommissioned 15 July 1957 and became VR-21, with detachments at Atsugi, Japan and NAS North Island. VR-21 was the first squadron to fly dedicated Carrier Onboard Delivery (COD) aircraft, the TBM-3Rs, a transport version of the TBM-3E, the General Motors version of the World War II Grumman Avenger torpedo bomber. On 26 June 1958, VR-21 NAS North Island Detachment made the first COD with the Grumman C-1A Trader aircraft to the USS YORKTOWN (CV-10). The Detachment relocated to NAS Alameda in 1960.

On 1 October 1966 VR-21 was decommissioned. The Atsugi Detachment became VRC-50, and the Alameda Detachment was commissioned as Fleet Tactical Support Squadron THREE ZERO (VR-30) equipped with Convair C-131 Samaritans and C-1A Trader aircraft. VR-30's mission included logistics support for Commander in Chief U.S. Pacific Fleet units. On 9 November 1966, VR-30 made its first COD arrested landing in the C-1A on the USS BON HOMME RICHARD (CVA-31). The squadron was awarded the Meritorious Unit Commendation for exemplary service from 1 January to 30 November 1967. From 1968 to 1973 VR-30 COD detachments operated aboard various carriers in support of recovery operations for Apollo X, XI, XII, and XVI.

In 1969, squadron C-1A's and crews operated from Danang, Republic of Vietnam in support of CTF-77. In 1971 VR-30 joined the Jet Age with two North American CT-39 Saberliners for high-speed executive airlift. In May 1973 the squadron received the first of four C-9B Skytrain II's to further improve its logistics support capability. On 12 March 1974 the Navy's first female Aviator, Lieutenant (Junior Grade) Barbara A. Allen reported for duty. After relocating to NAS North Island, VR-30 was decommissioned on 1 October 1978 and VRC-30 was concurrently commissioned. VRC-30 transitioned to the C-2A in late 1981 by accepting deliveries of the first "Greyhounds", the aircraft the squadron operates today.

The century concluded with another "Battle E" award in 1998. The year also saw Detachments ONE and TWO earn the Golden Hook Award for best carrier landing grades in the air wing while operating in support of Operation DESERT FOX and Operation SOUTHERN WATCH. The Providers also earned their seventh Chief of Naval Operations Safety award since 1979.

The new millennium proved to be a continuation of the tradition of excellence for VRC-30. The squadron participated in every major military exercise on the west coast as well as combat operations in support of Operation IRAQI FREEDOM and Operation ENDURING FREEDOM. The Providers again earned the COMNAVAIRPAC Battle Efficiency award in 2002 and 2003. In 2004 VRC-30 stood down C-12 operations, focusing solely on the COD mission.

The years to follow saw several major developments and upgrades in the C-2A, beginning with the critical Service Life Extension Program (SLEP) in 2006. The SLEP increased the airframe lifespan from 10,000 flight hours or 15,000 carrier landings to 15,000 flight hours or 36,000 carrier landings. The program will allow the current fleet of Greyhounds to operate until 2027. The SLEP was followed by an aircraft rewire in 2008, and the most recent LOT 4 upgrade in August 2010. The LOT 4 upgrade, completed in September 2012, provided pilots with a new CNS-ATM glass cockpit and the eight-bladed NP2000 propeller system, which increased performance, reduced airframe vibration, and improved maintainability. During this period of substantial change and while maintaining a high operational tempo, the Providers continued to earn seven more Battle Efficiency awards in 2005, 2006, 2007, 2011, 2012, 2013, and 2016.

During 2016, the Providers of VRC-30 supported the USS NIMITZ (CVN-68), USS CARL VINSON (CVN-70), USS THEODORE ROOSEVELT (CVN-71), and USS JOHN C. STENNIS (CVN-74). VRC-30 flew 2,597 sorties, transported 12,282 passengers, and carried over 830,000 pounds of mail and cargo while supporting Fleet Replacement Squadron (FRS), Carrier Air Wing (CVW), Chief of Naval Air Training (CNATRA) carrier qualifications, CVN Flight Deck Certifications, CVW work-ups and deployed forces around the world. In addition to the critical Aircraft Carrier support the Providers supplied, they are a cornerstone in the training and readiness of the Navy Special Warfare community. VRC-30 directly supported 120 personnel airdrop evolutions for the Leap Frogs (United States Navy SEAL Demonstration Team), Naval Special Warfare Development Group, and Explosive Ordnance Disposal Training and Evaluation Unit ONE in preparation for public relations events and upcoming deployments in support of Operation INHERENT RESOLVE. Notable Leap Frog events that VRC-30 provided support for were Stanford Stadium, the El Centro Air Show, as well as providing 14 days of lifts for the Leap Frogs tandem jump training. The Providers also safely conducted a round trip, high-risk aircraft transfer from San Diego, California to Atsugi, Japan encompassing 11,364 miles. The aircraft transfer provided Detachment FIVE with a mission capable aircraft for FDNF (Forward Deployed Naval Forces) tasking with Carrier Strike Group FIVE and returned an aircraft to San Diego, California for critical maintenance actions. VRC-30 also had the privilege of housing Marine Corps squadron VMX-1 and participating in the V-22 FBE (Fleet Battle Experiment) during the summer of 2016, a major milestone for the VRC community as it was first time the Osprey was utilized in its future role as the replacement aircraft for the C-2A Greyhound. The Providers accomplished all of this is in addition to successfully conducting workups and deployments for Det 2 and Det 4, as well as the accomplishments of our permanently forward deployed Det 5.

As usual, this kit it’s in 1/72 scale. It’s the Hasegawa E-2C Hawkeye kit with the North Wings Fuselage conversion, and Quick Boost props.

The North Wings conversion is pretty decent, the resin is crisp and with nice engraved detail. It’s designed to basically fit the E-2 wings, so you use those, the cockpit and windshield, and the engines and landing gear. It comes with decals, although they are considerably thick. There is also an RVHP conversion, but never saw one in person.

I’m not sure if North Wings, which was Japan based, continues to operate. Although their products were pricey, they used to make a nice range of things. For the C-2 they had a “Popular” version (the one I used), and a “Premium” one, with more parts and interior details. I was able to find their website if you want to check it out: https://n-wing.sakura.ne.jp/secure/index.php?p=productsList

Regarding the Hasegawa E-2C I don’t have much to say other than is a very nice kit. Since it has been around for a lot of years now, I guess most if us are familiar with it.

Model construction started with the cockpit. I used an Eduard E-2 Interior Set, but you can’t see a thing in there once closed, obviously. I also put pilots in it which are of course barely visible.

The wings fitted well with the fuselage after following the cutting instructions that come with the conversion, so this is how the C-2 looked before the overall paint job.

The model was painted with Humbrol enamels, 129 for the grey, and 130 for the white. At that time I wasn’t into pre-shading so even with some washes application it actually looked pretty clean.

I also decided to paint the tail instead of using the decal. I like to paint these things most of the time because I think looks better than the decal. In this case I used a reverse technique, meaning I painted the pattern color first, and then masked it to paint the base. I honestly don’t remember what blue I used, but for the yellow I used Chrome Yellow from Testors.

After all the painting, decaling, and some light weathering, this is how the model looked with everything put together.

For the display base I went with the usual Plymor walnut base. This one was big, 20” x 12”. The deck is from Coastal Kits, to which I added the center-deck hatch operator post and the catapult shuttle. You can find their products on EBay or at http://www.coastalkits.co.uk

I’m not good at painting figures, so I asked my good friend and Master Modeler Daniel Bustos to paint them for me. The figures are from the Fujimi Carrier Deck Set. You can see some of the amazing work that Daniel does here: https://www.facebook.com/Historical-Miniatures-Painting

This was the final result with everything on. The scene represents the moments before the cat shot on board the USS Abraham Lincoln (CVN-72). 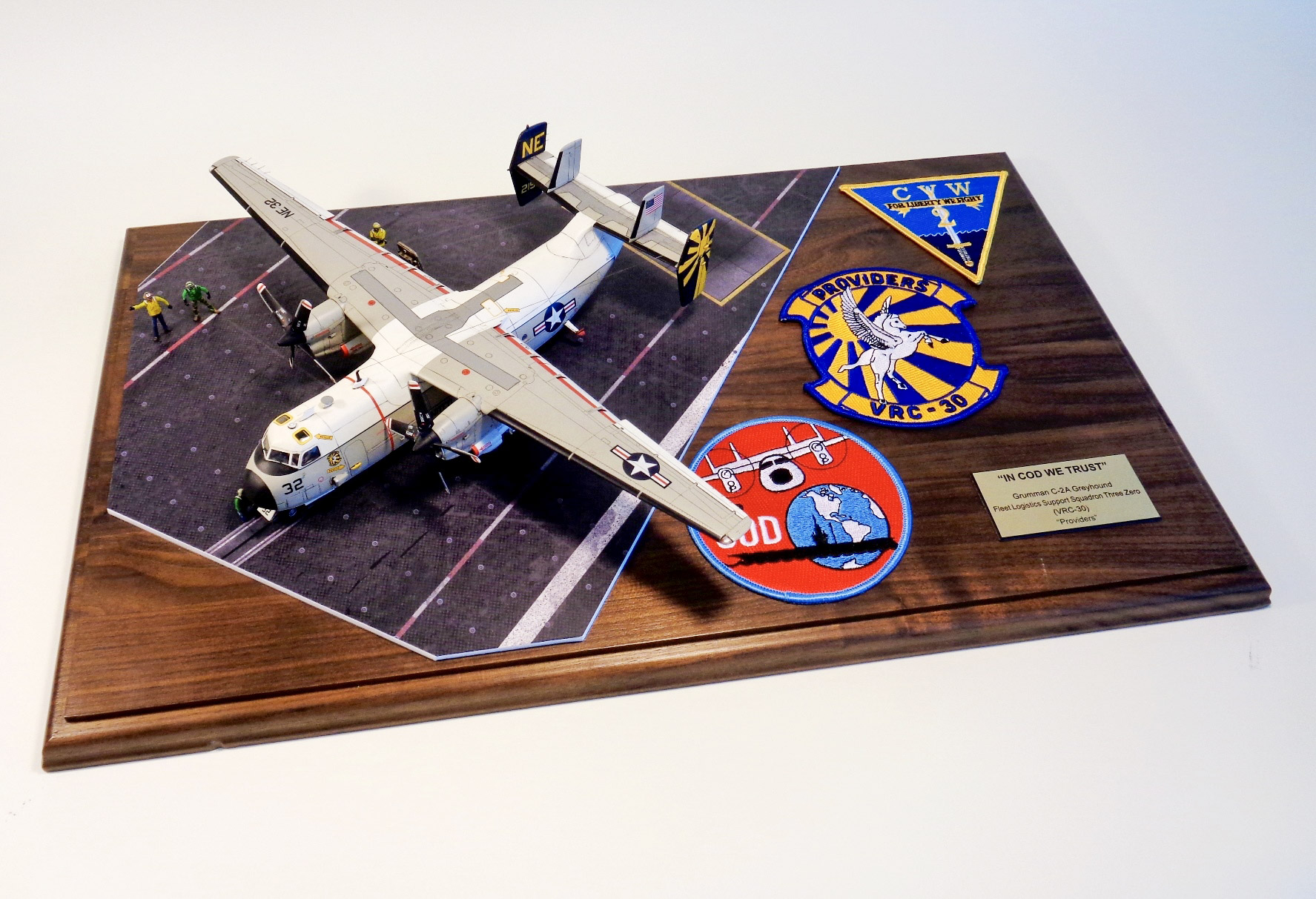 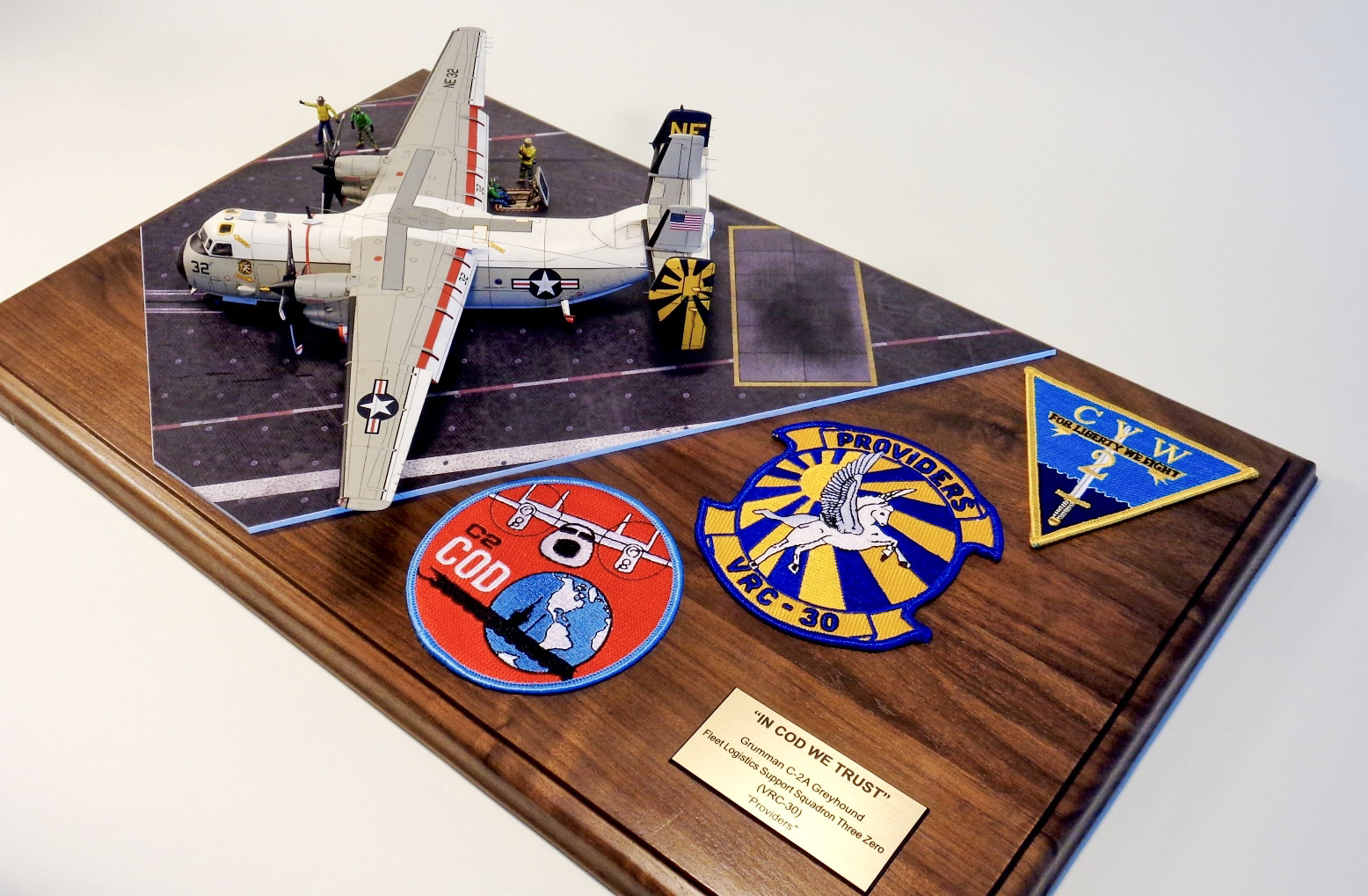 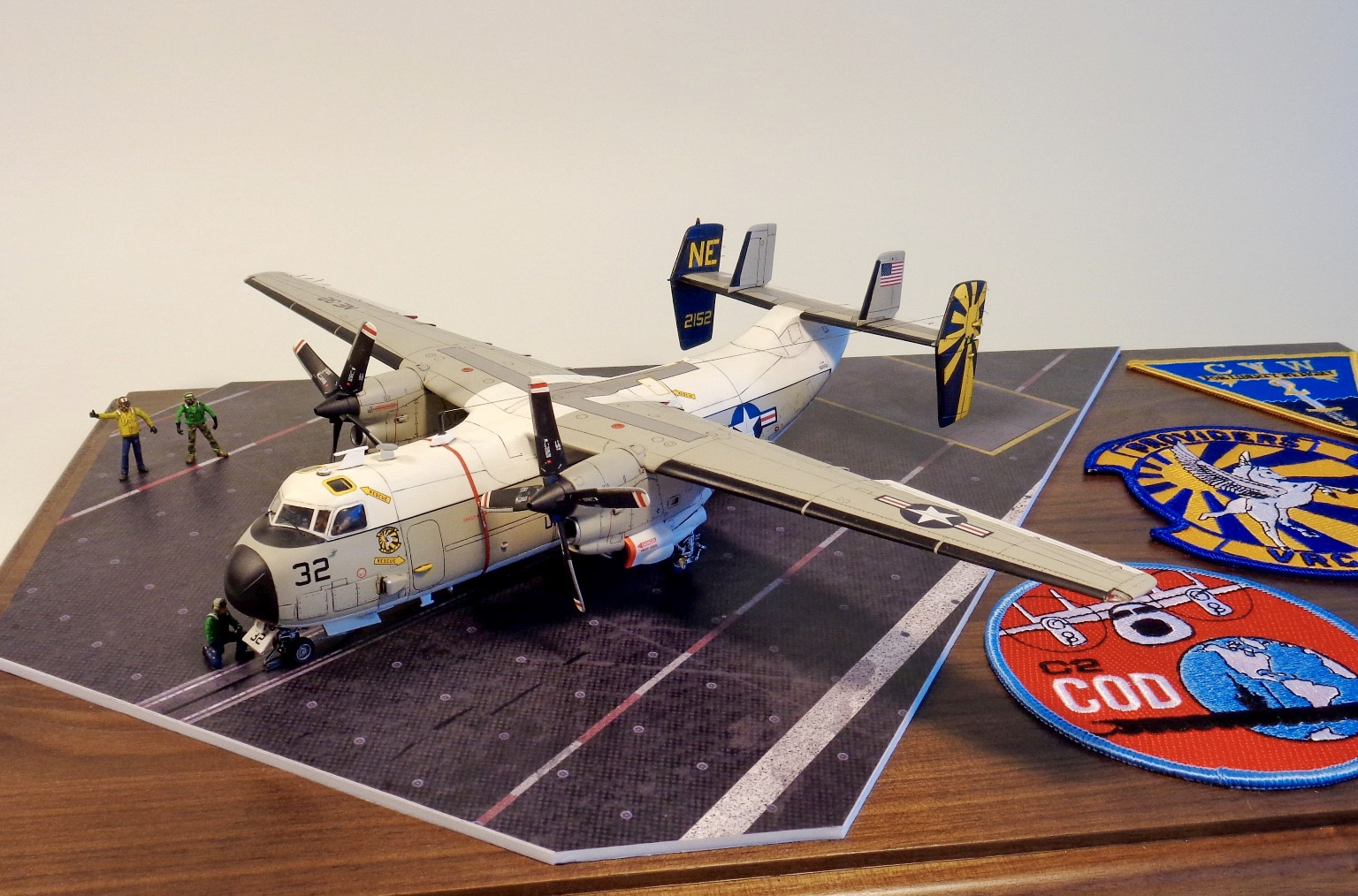 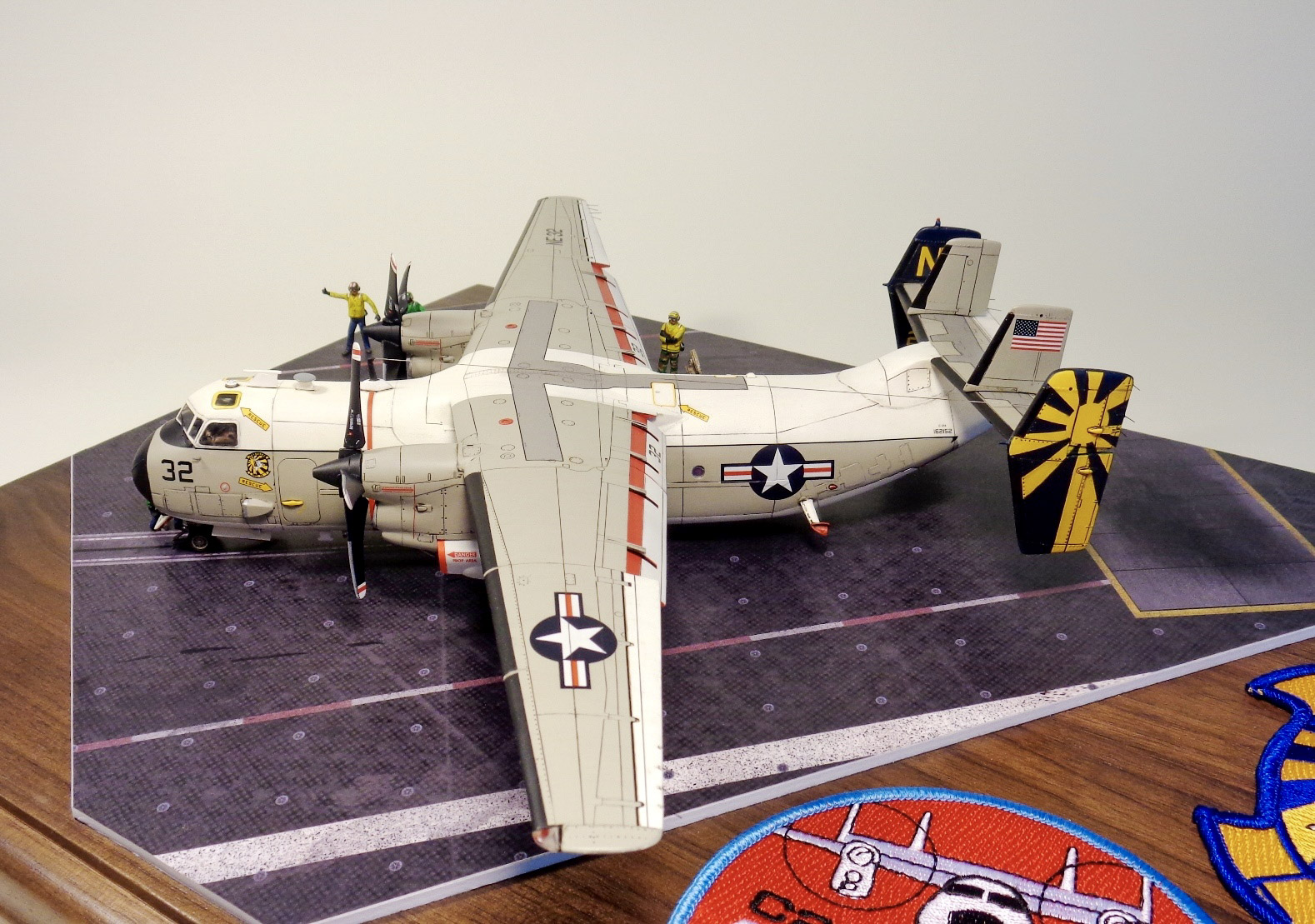 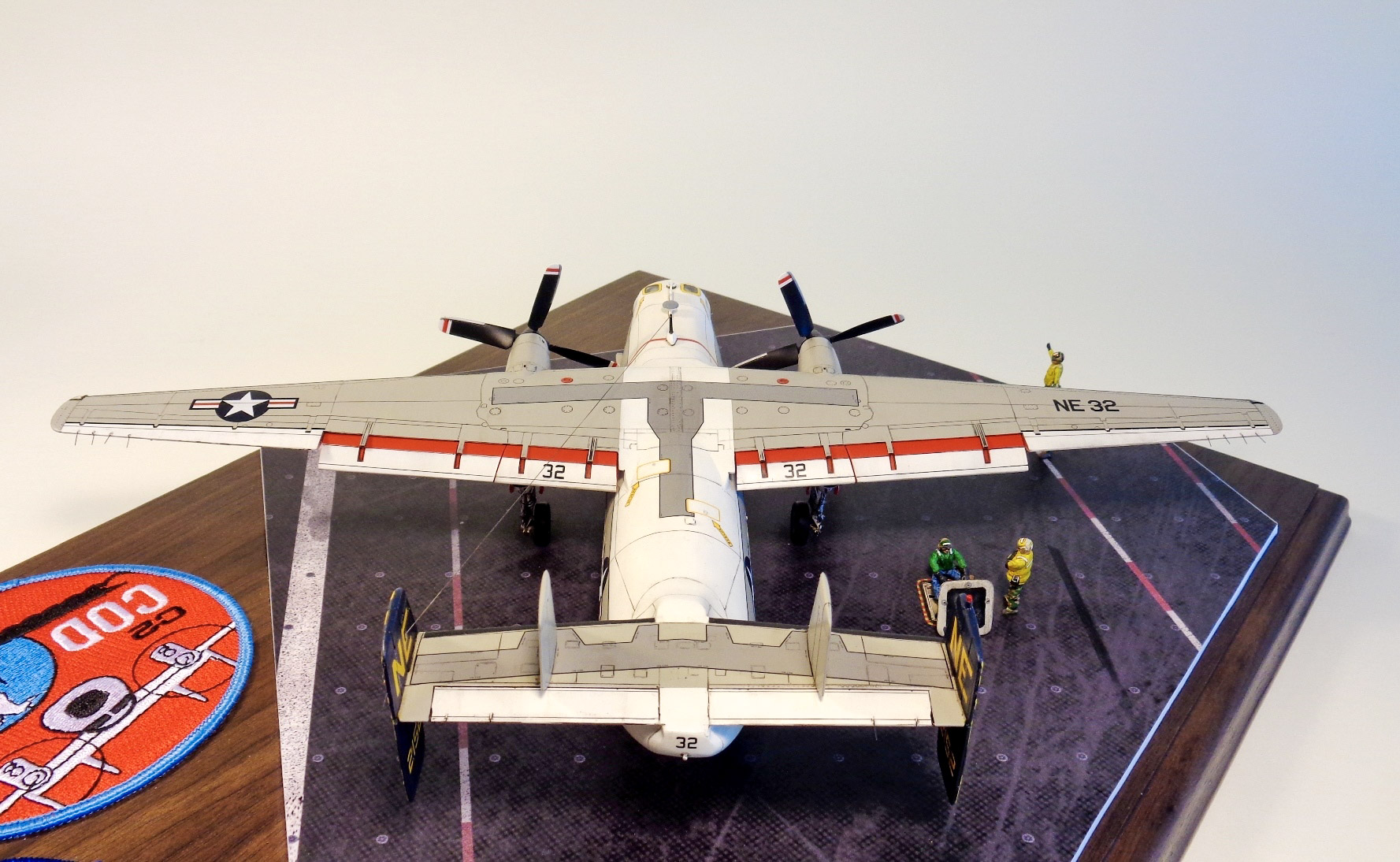 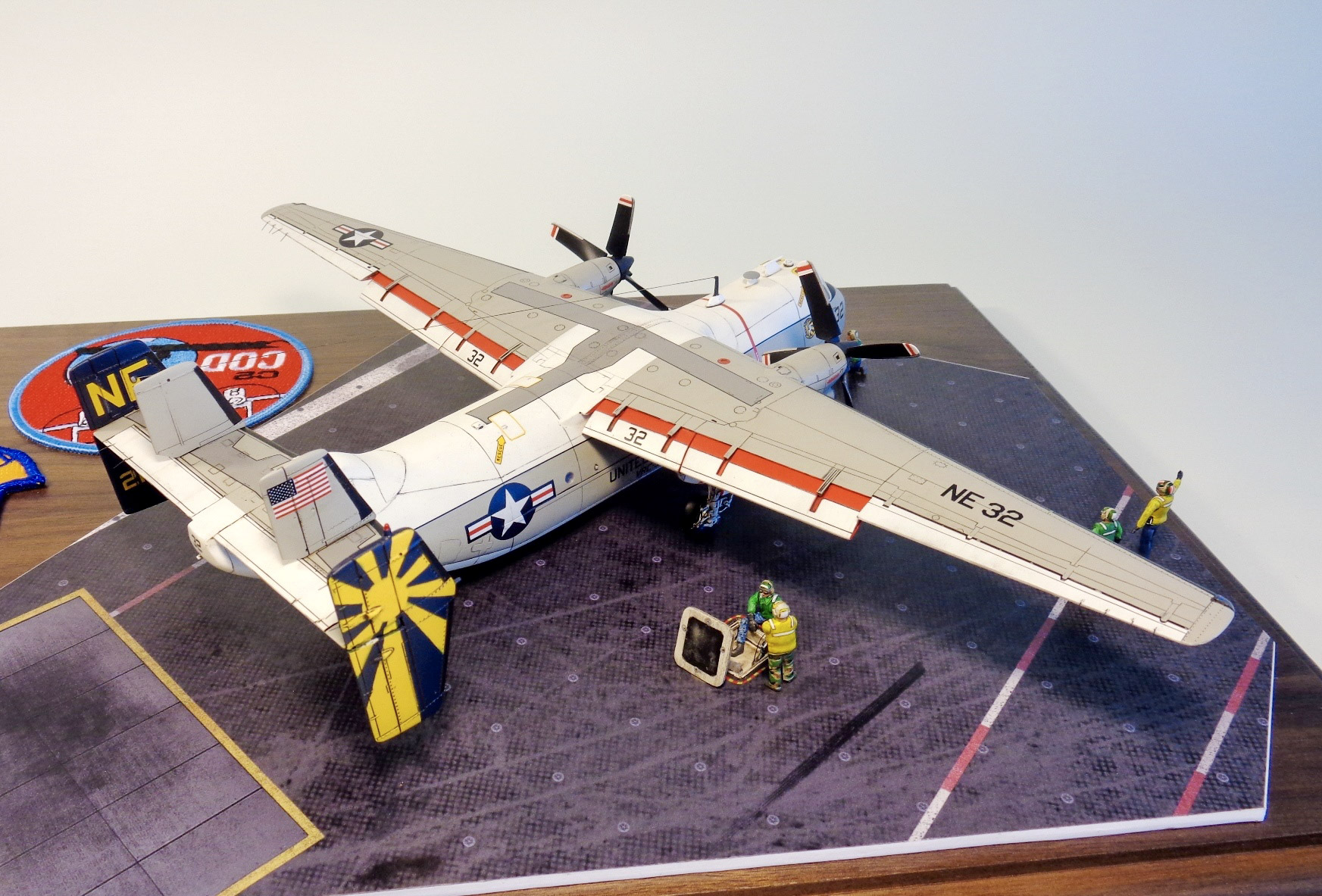 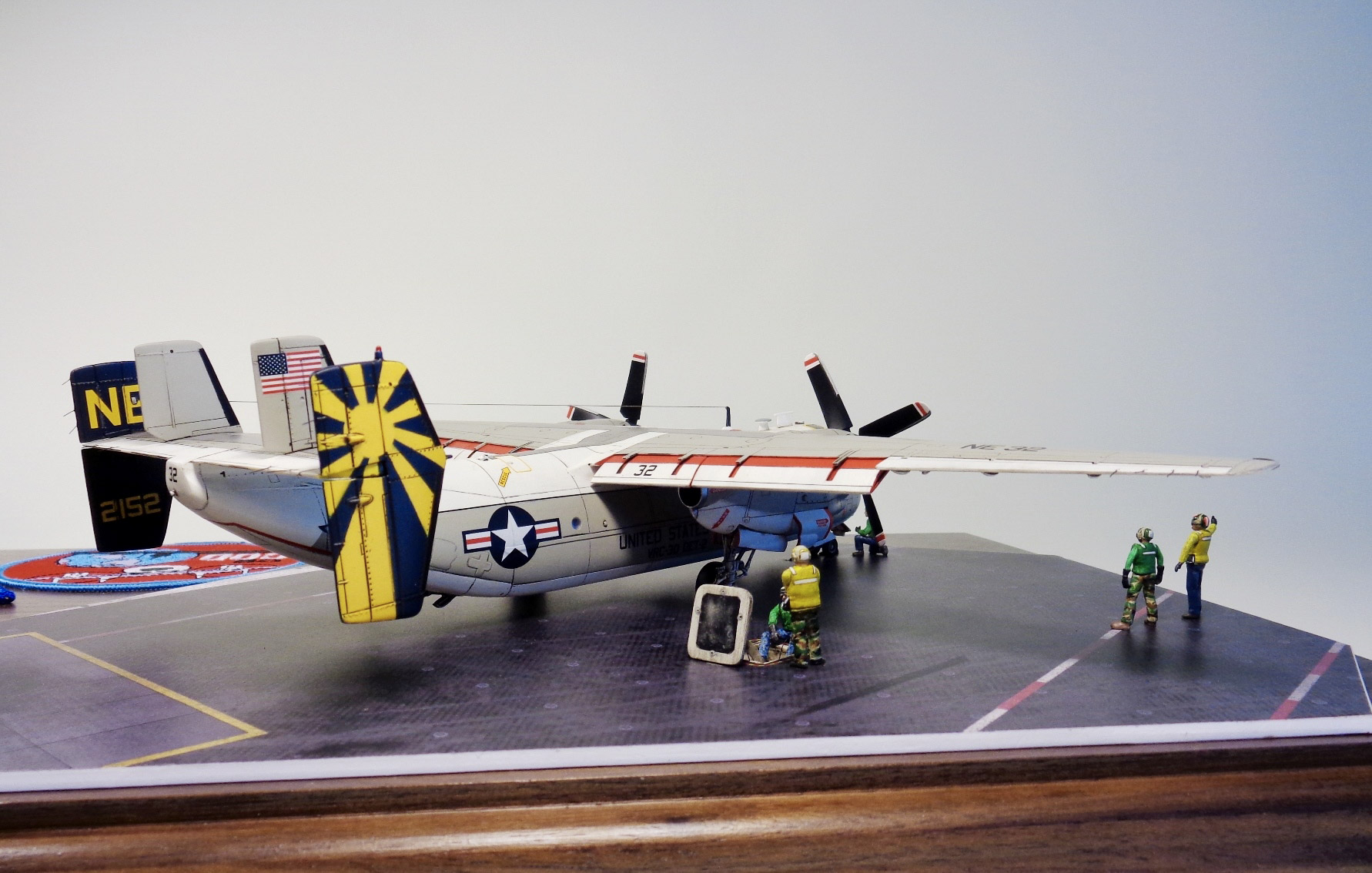 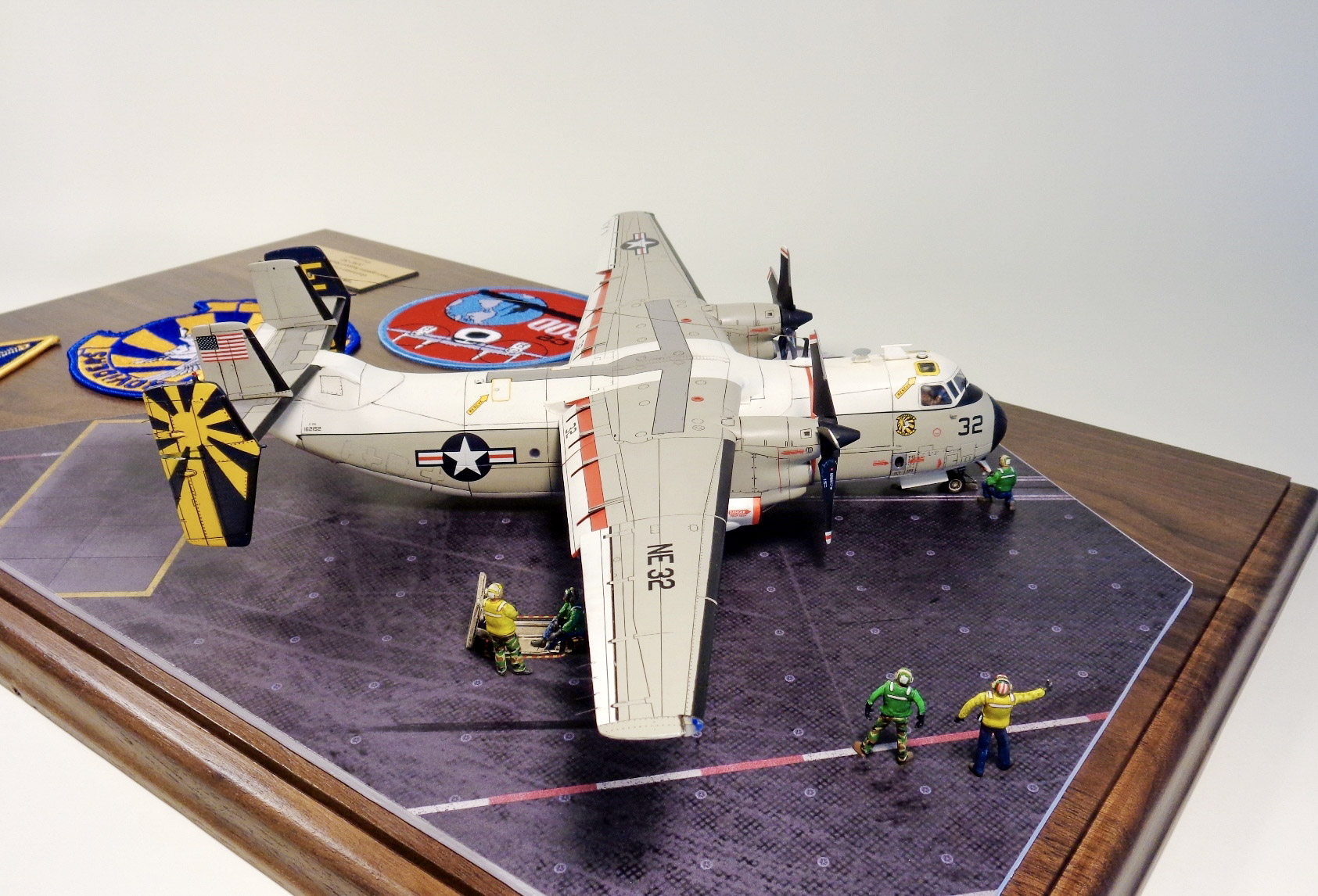 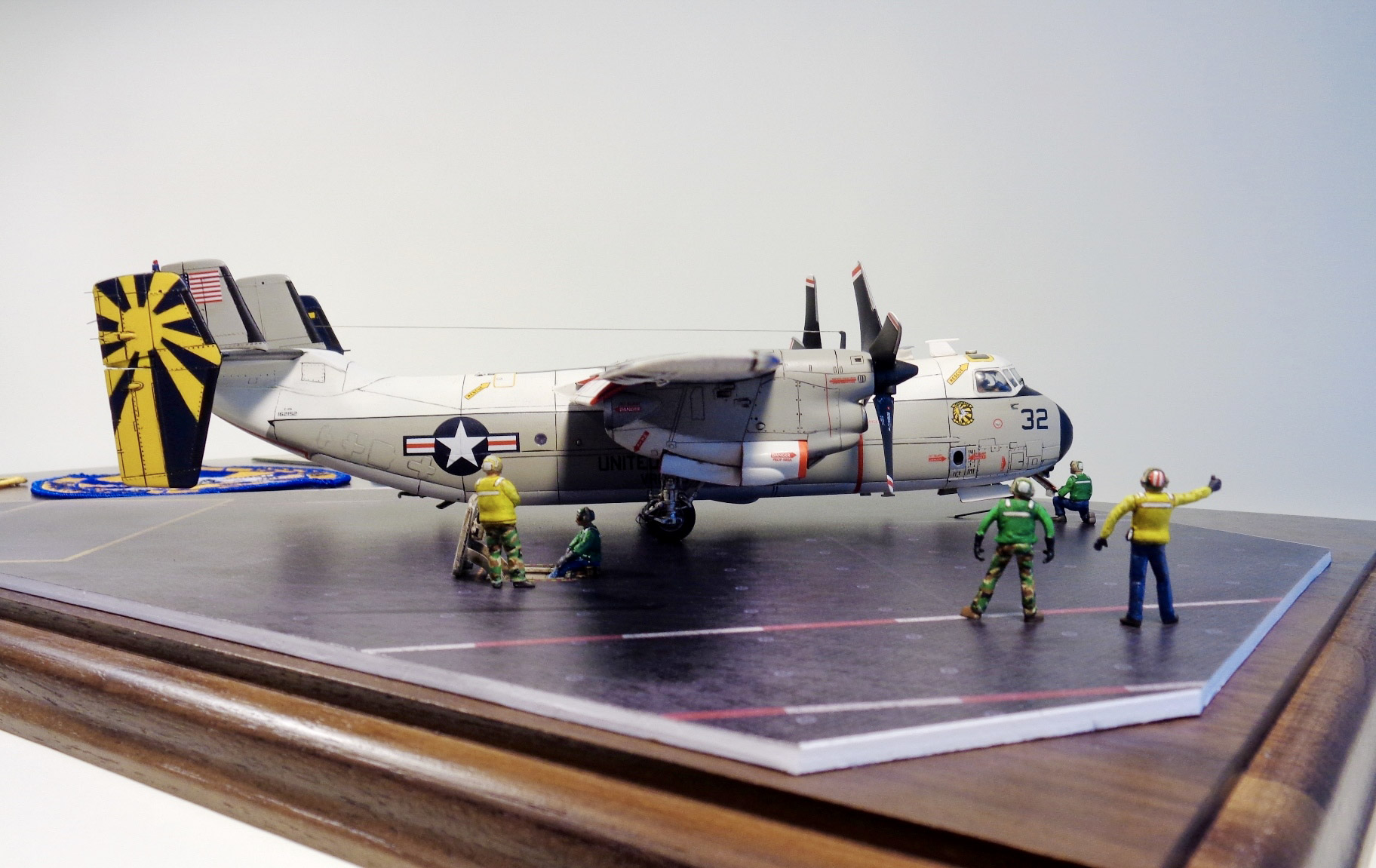 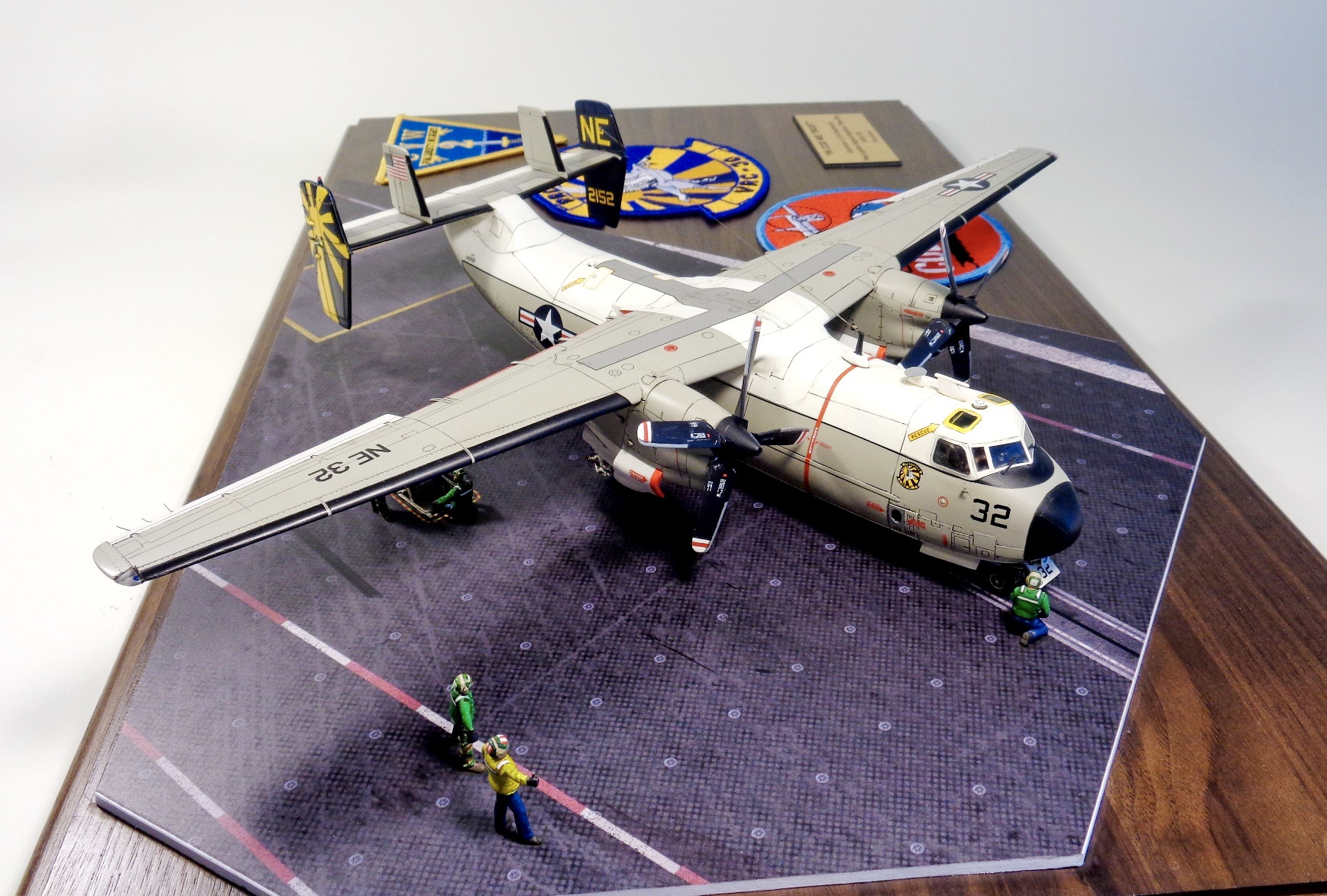 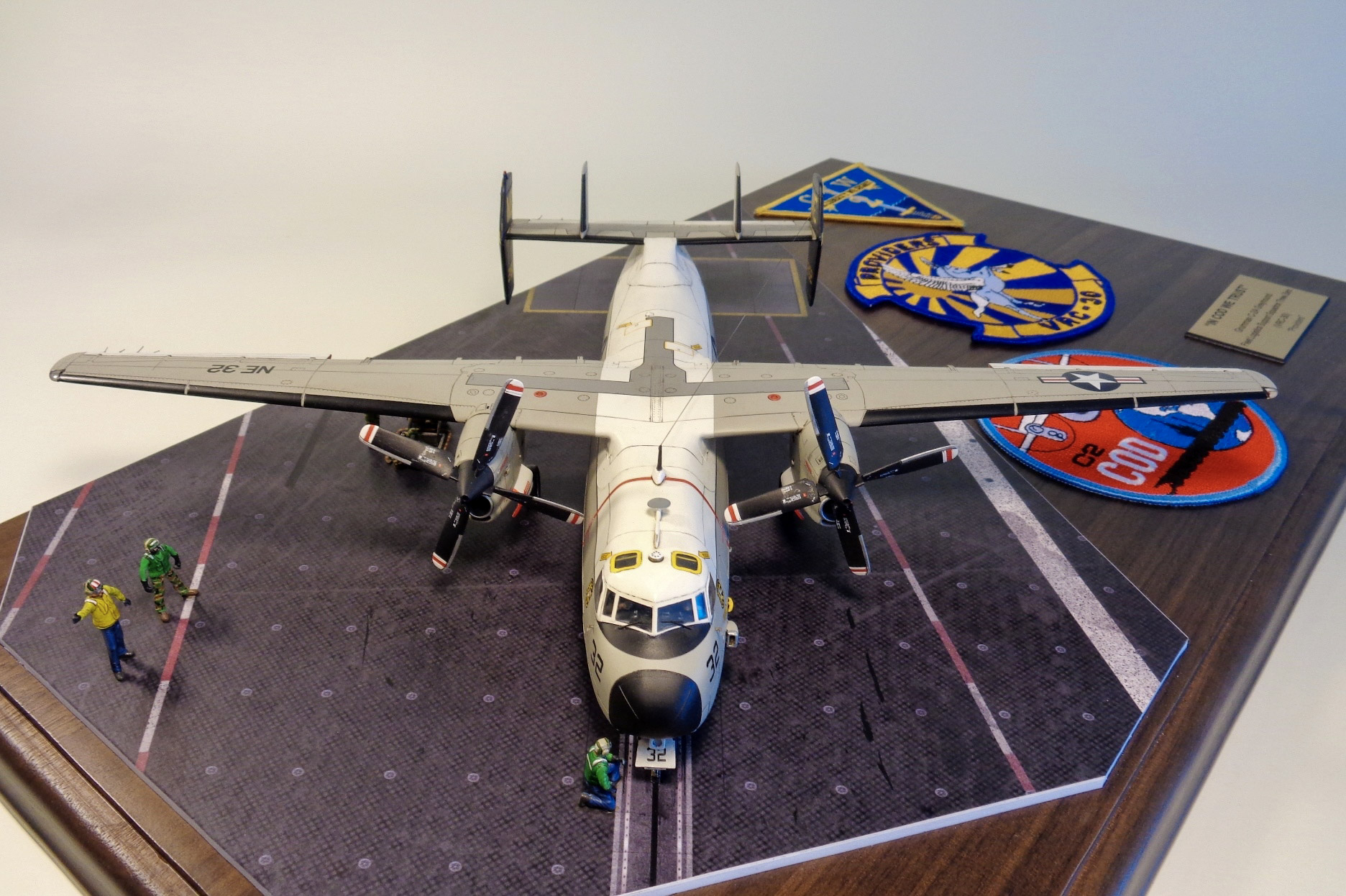 This was a very nice project for me, it connected me with part of my friend’s life, and as usual helped me to learn new stuff. I also enjoyed the fact that this was both a challenge and a rare subject, since there aren’t many C-2s in 1/72 out there.

If you are thinking on a C-2 in this scale, going with one of these conversions is a good option (if you are willing to pay the price); if not, the 1/48 Kinetic one looks pretty nice.

I hope you liked this one, if you have any questions, drop me a line below.

Thanks much for reading, and as always, happy modeling!